skip to main | skip to sidebar

WHAT IS LOST? WHAT IS GAINED? 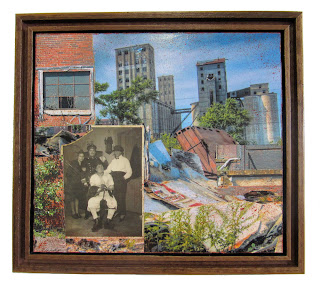 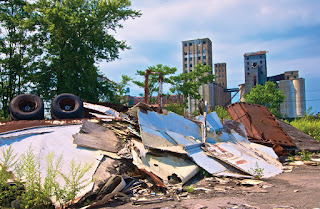 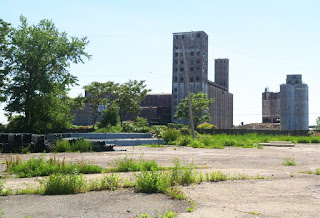 In 2010, I photographed a trashed 18-wheeler on Ohio Street. In the background were the grain elevators of the Cooperative Grange League Federation. The shot became part of a collage combining a vintage photograph of a theatrical group. I had found it in an album thrown out on the street that year.

Yesterday, as I walked on Ohio Street so much has changed. The trashed truck is gone and in its place are construction materials signaling that a big project is planned. The new Riverfest Park has turned the water’s edge into a tourist destination. And in the background are the elevators, minus one. The 1909 Wheeler Elevator with its monitor roof has been demolished. It was taken down at “the 11th hour” with preservationists fighting the City Commissioner. During the demolition, part of the tower fell dramatically into the river.

The clusters of grain elevators along the Buffalo River are so central to Buffalo’s identity. Can the city, the preservationists and businesses come together to decide which teeth in the landscape should be saved and what can be pulled out? Can painful dramas end with a master plan in place? Buffalo is filled with amazing pieces of history of all sizes. Can we slow down before tossing them away?
Posted by Elizabeth Leader at 7:56 AM No comments: 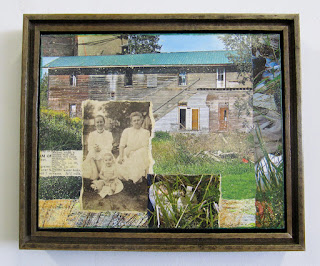 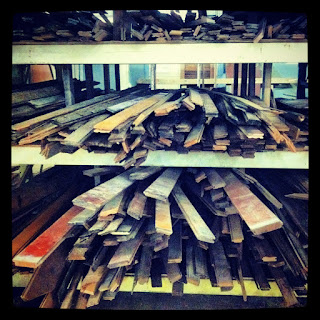 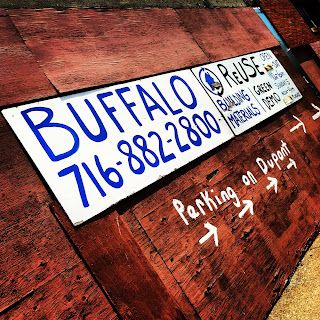 Looking for inspiration? Try rummaging around in Buffalo ReUse – located in the huge old Kaufman’s Bakery Building at 296 East Ferry. It’s filled with wooden doors, window frames, porcelain sinks and all the other details that were once found in Buffalo homes. ReUse has saved them from the landfill and will sell them back to you for pennies.

I thought strips of flooring could be the perfect material for framing a series of collages. Sanded, tinted and coated, the flooring fit the time period better than any molding I had seen in a frame shop.

Here’s one of my “Discarded Ancestors” collages finished off with a strip of flooring. For more stories of art out of the rustbelt, please join my blog. If you are using recycled materials too, I’d love to share ideas.

Posted by Elizabeth Leader at 9:30 AM No comments:

THE CITY OF GOOD NEIGHBORS 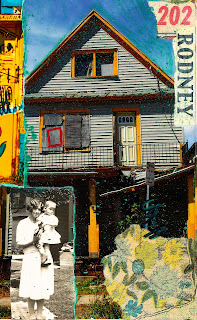 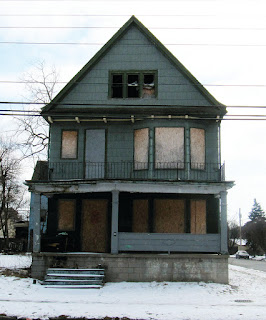 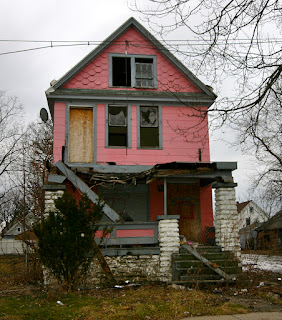 Buffalo has been nicknamed the “City of Good Neighbors.” While exploring the city’s lost neighborhoods and photographing abandoned homes, I noticed a common architectural element. Most houses have front porches. It’s easy to imagine a time, when the area’s population was at its height, that people came out of their front door and waved to a neighbor several houses down the street. Children played their games up and down the stairs from one porch to another while mothers looked over and shared some news with a neighbor. The architecture itself, sets up a light and steady neighborhood communication that, though broken in some places, is still alive and active in other parts of Buffalo.
Here are 3 photos of abandoned houses plus one of my “discarded ancestor” collages. The mother/child photo was in an album thrown out on the street. The house marked 202 Rodney Street was demolished this year.
For more stories of art out of the rustbelt, please join my blog!
Posted by Elizabeth Leader at 1:38 PM No comments:

Elizabeth Leader
Buffalo, New York, United States
I am an environmental artist with an eye for urban decay. I paint in oils & acrylics and use a wide variety of materials to communicate ideas about "the trail we leave behind us".