skip to main | skip to sidebar

THIS BLOG IS MOVING! 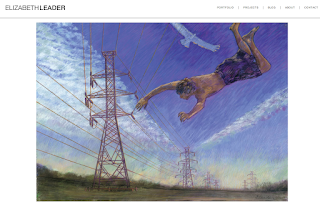 Thank you for visiting! My blog is now incorporated with my newly enhanced website. I invite you to check it out at:  http://www.elizabethleader.com

Posted by Elizabeth Leader at 6:54 AM No comments: 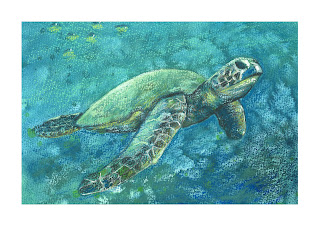 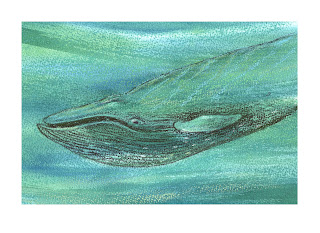 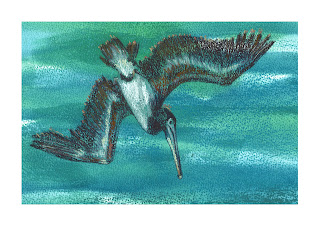 “GYRE: The Plastic Ocean,” will now be traveling to the Natalie & James Thompson Gallery at San Jose State University in San Jose, California. This exhibit spotlights an international group of artists focused on trash in the oceans.  What’s happening in the Gyre is too far off shore for people to understand the destruction.  Even seeing the spinoff masses of trash along beaches doesn’t give us the scope of the problem.

But like plastic floating along the currents, information follows currents too.  “GYRE: The Plastic Ocean,” first opened at the Anchorage Museum in in Alaska, then with the aid of the Smithsonian, “GYRE” moved to the David J. Spencer CDC Museum in Atlanta, Georgia. After several months it traveled to the USC Fisher Museum in Los Angeles and now opens in San Jose on February 2, 2016.

Since the time several years ago when I read a little ‘News of the Weird’ article about the ‘Great Garbage Patch’, so many more people have become aware of the gyre. Information is flowing in from all over. Some people even have ideas on how to clean up our rivers, lakes and oceans. The value of water is rising!

Attached are three of my drawings of birds, turtles and whales affected by trash in the oceans.
Posted by Elizabeth Leader at 9:50 AM No comments:

“GYRE: THE PLASTIC OCEAN” travels with the Smithsonian 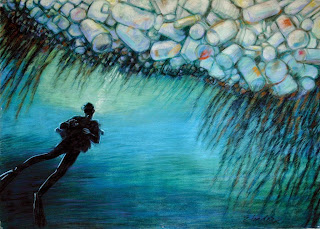 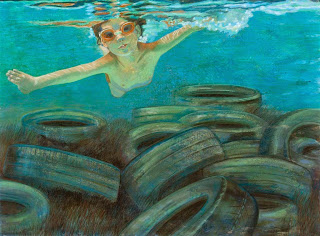 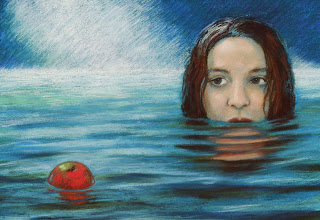 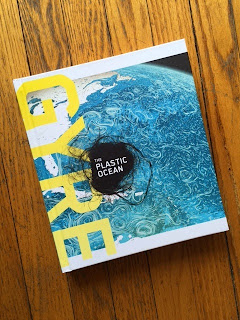 In a culture dependent upon the modern convenience of plastic, throwaway products of consumption are affecting oceans and shrinking our world as we all become connected through our trash. Organized and first exhibited in Anchorage, Alaska, “GYRE: The Plastic Ocean” combines art and science to bring the problem into perspective. Now, through the Smithsonian, “GYRE” is on display at the David J. Spencer CDC Museum in Atlanta, Georgia until June 19, 2015. This fall, “GYRE” will travel to the USC Fisher Museum of Art in Los Angeles and open on September 2, 2015.

Three of my works are included in “GYRE.” I illustrate what I see through my imagination to make these concerns real to others. “Plastic Reef” shows a diver encountering a reef of discarded plastic bottles. “Tires Underwater” lets a child swim in dangerously trashed waters. “Eve and the Apple” is my version of the Garden of Eden after climate change.

“GYRE: The Plastic Ocean” was also created as a compelling book by Julie Decker and the Anchorage Museum staff. It is now available on Amazon.com for those who want to find out more about how artists can add illumination this pressing environmental problem.


Posted by Elizabeth Leader at 7:13 AM No comments: 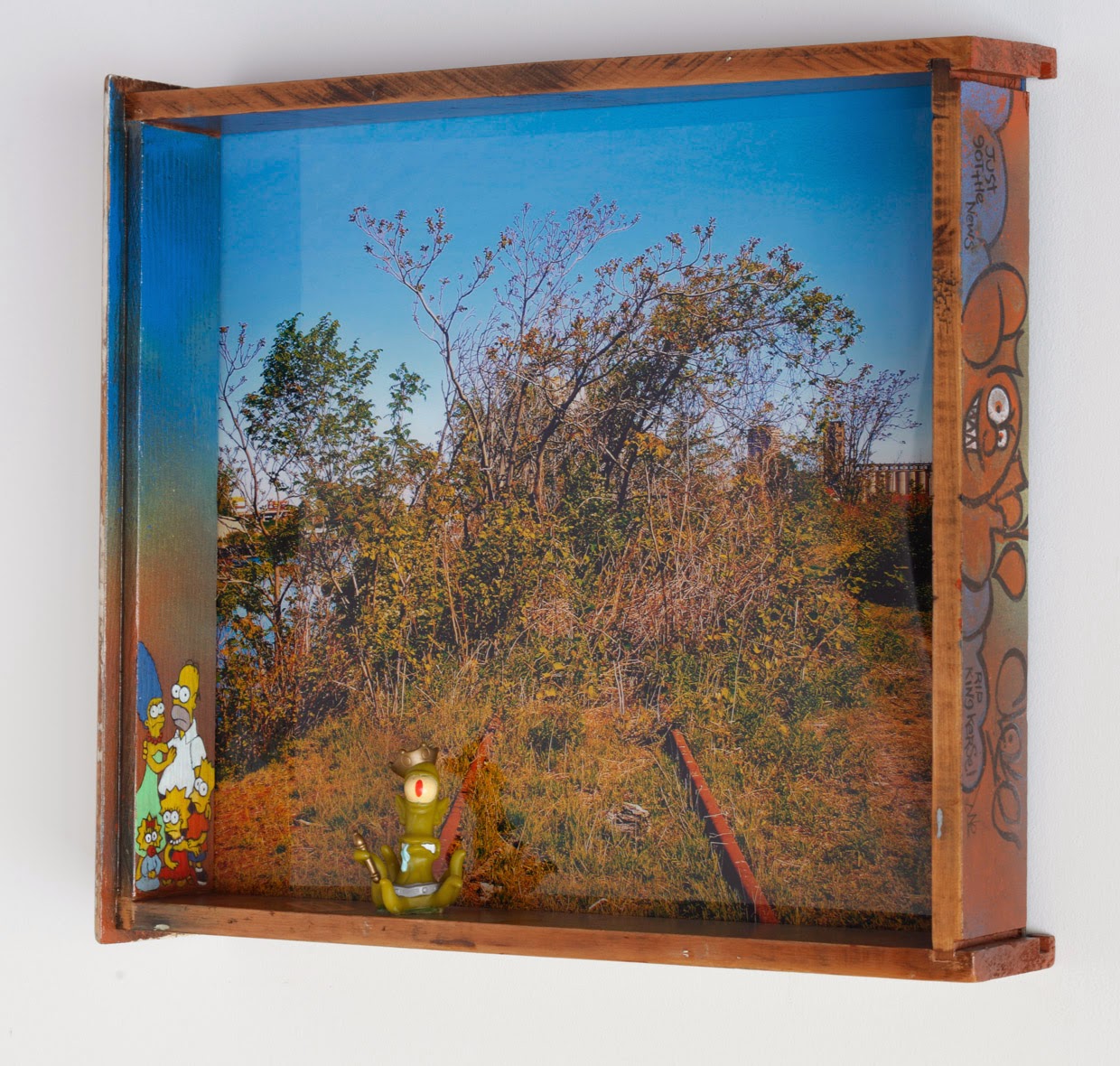 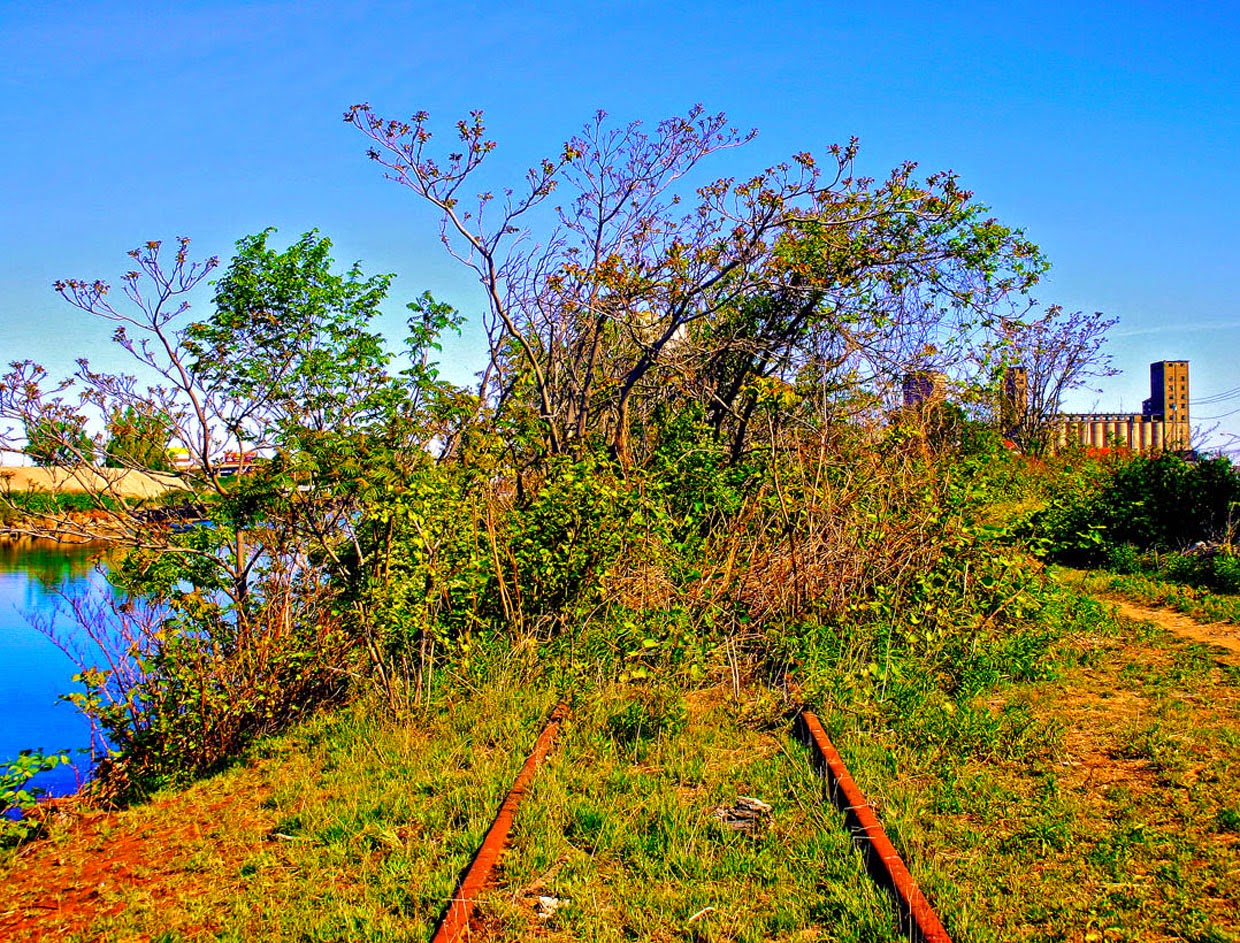 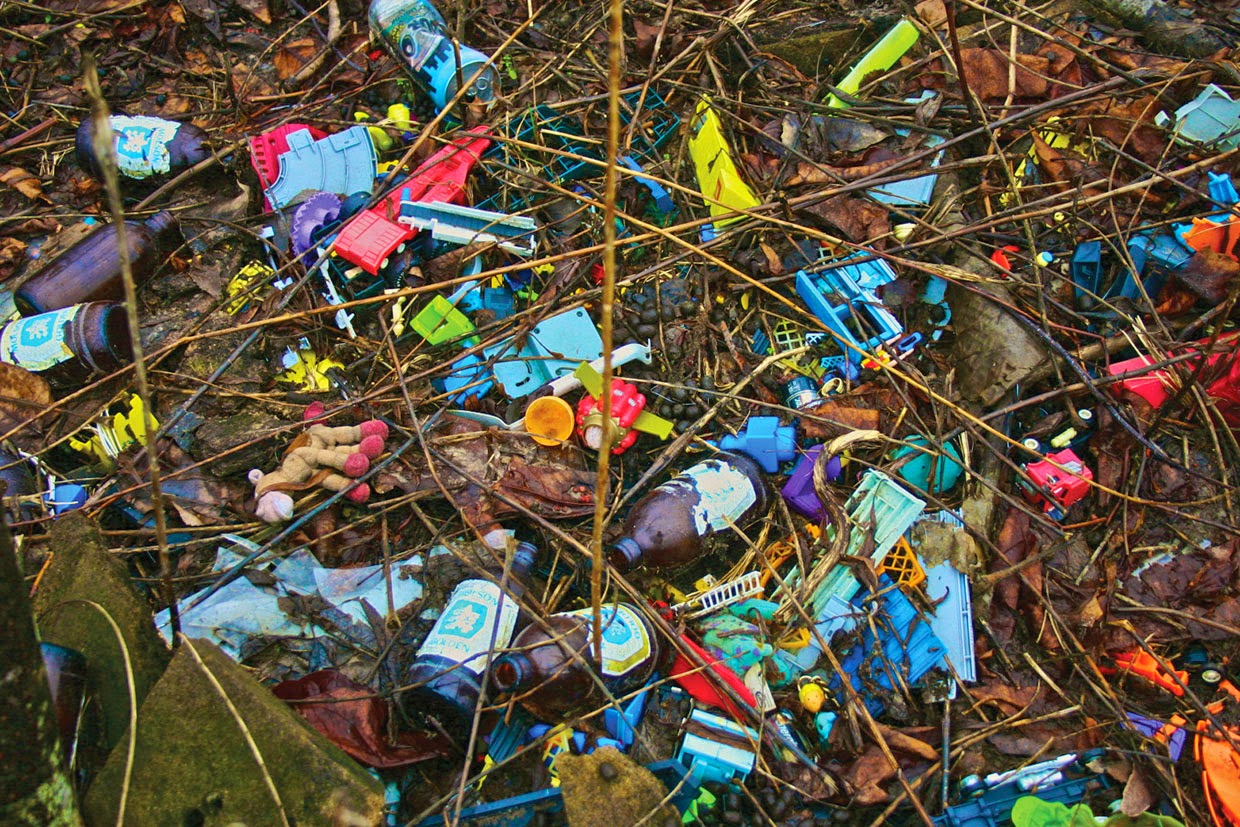 Hiking on Ohio Street in Buffalo, where the train tracks, silos and canals all intersect, we found a campsite behind a bush growing out of the abandoned rails. Travelers had built a fire and drunk some beers. One of them had thrown out his toy collection. I am guessing it was a boy by the amount of little trucks and cars, a boy who saved all his Happy Meal toys when he had the chance.  For some reason it was time to leave them behind. Deer scat by the charred wood gave evidence of other life passing through this trail as well. Nearby were live rails with graffiti-covered train cars leading towards the General Mills plant. I like to imagine these “wayward teenagers, adventure seekers and high school runaways”* having a good, safe stop in Buffalo before the next part of their journey. Did some of them go back home or keep crisscrossing the country?  I wish them well and thank that unknown boy for his toys.

The Kang piece became the center of this assemblage. Kang and Kodos, the alien figures from the animated Simpsons TV show, have landed in Buffalo close the campsite.  A sub-surfaced mounted photograph of the site framed with a discarded drawer keeps this world together. Graphics of the Simpsons and graffiti copied off one of the train cars are painted on the sidewalls. Altogether, it’s my landscape painting.

*More on TRAVELERS:  The quote is from Mike Brodie’s book, “A Period of Juvenile Prosperity.” Brodie spent years 4 years as a traveler, documenting his experience by photographing his friends as he put on 50,000 miles through 46 US states. Amazing pictures from inside this world.

Posted by Elizabeth Leader at 6:08 AM No comments: 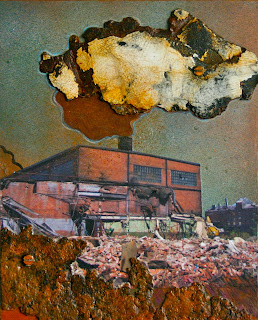 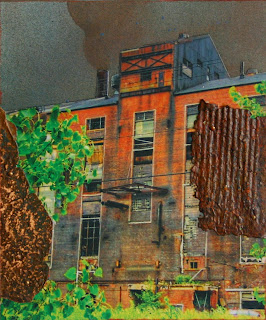 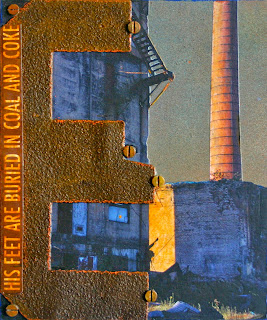 Trespassing around abandoned spaces in Buffalo is an urban adventure for people from all over the world. I will not admit I have done this, but will say every citizen should have a chance to visit Bethlehem Steel. Coming from Boston, the history and economics of Buffalo has been a fascinating mystery to me. Walking into Bethlehem is like coming upon a crime scene - or, given the vast scale of the place, a battleground. Who passed through and left it so abandoned?  It is one thing to hear “the jobs all went to China,” but another to fully experience the exodus.

I’ve just finished a short series of little assemblages. On 5” x 7” blocks of inch wood, I’ve combined my photos with spray paint, acrylic, nails, screws, and rusty metal. These little relics help me process the experience.  They will be on view in Studio 509 at the TriMain Center, 2495 Main Street, Buffalo, NY. Coming up soon is the Buffalo Arts Studio Holiday Exhibit and Sale. It opens Saturday, November 22. Lots of treats, music and artworks for holiday giving!

Posted by Elizabeth Leader at 8:03 AM No comments:

UP IN THE BARGE AT THE BURCHFIELD PENNEY 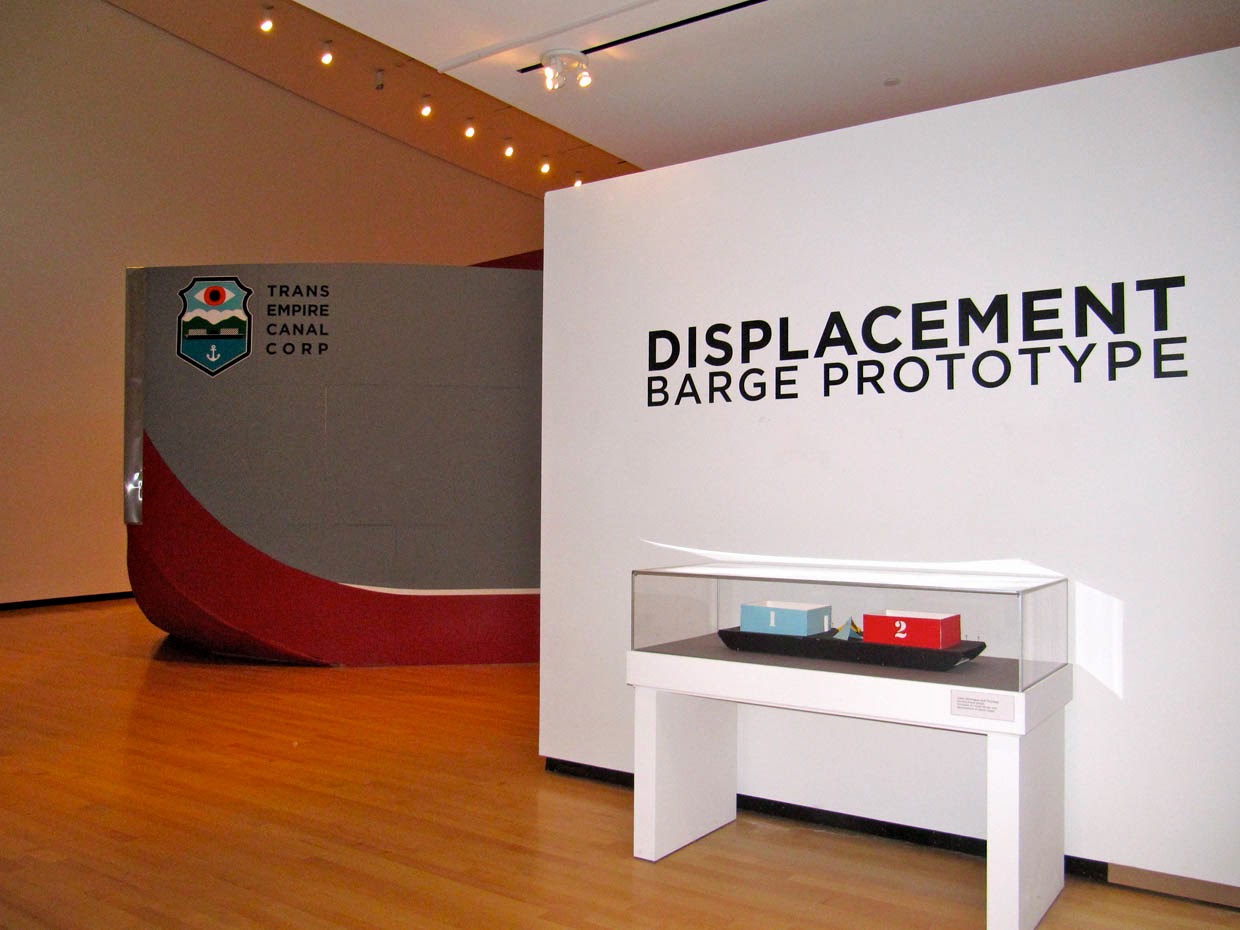 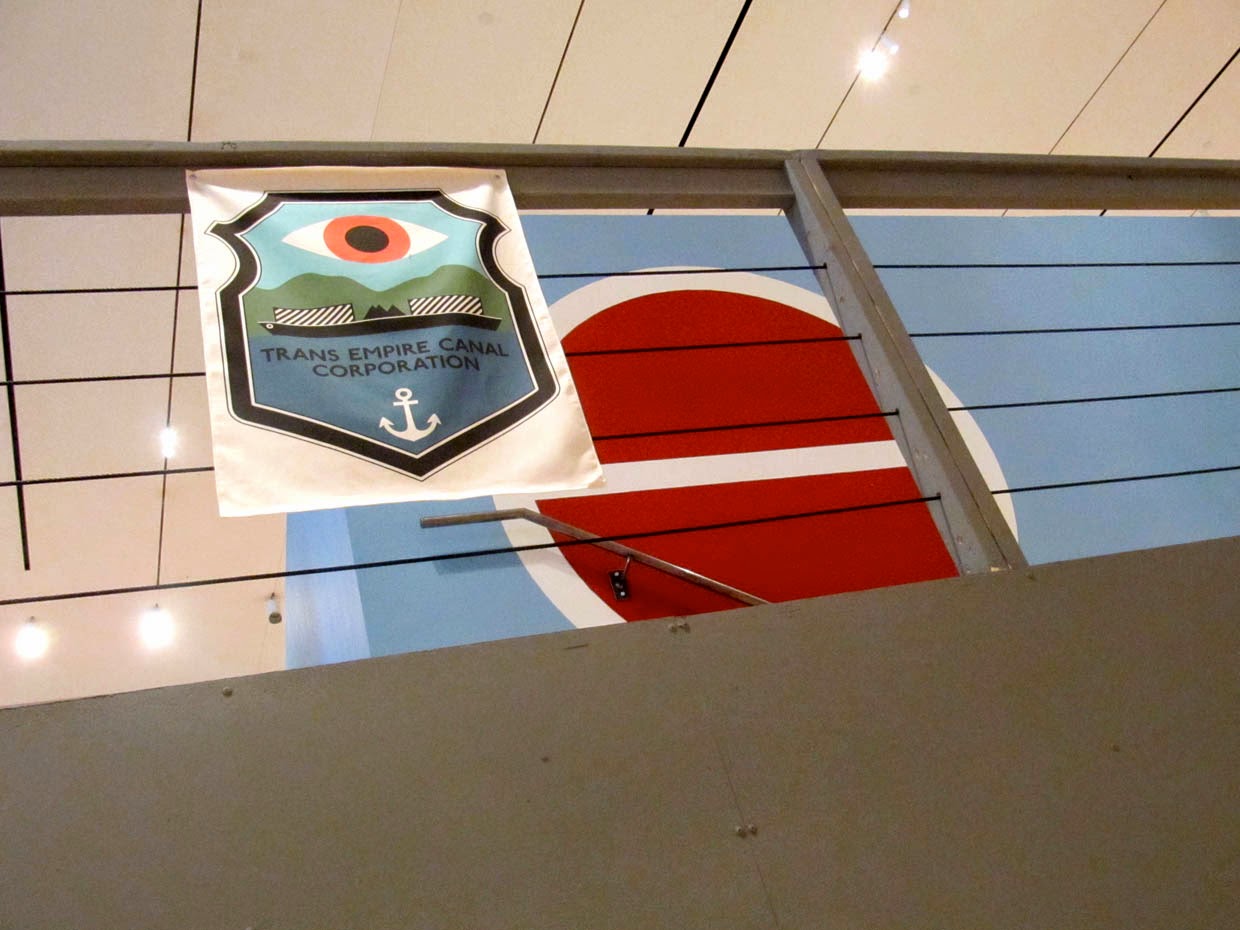 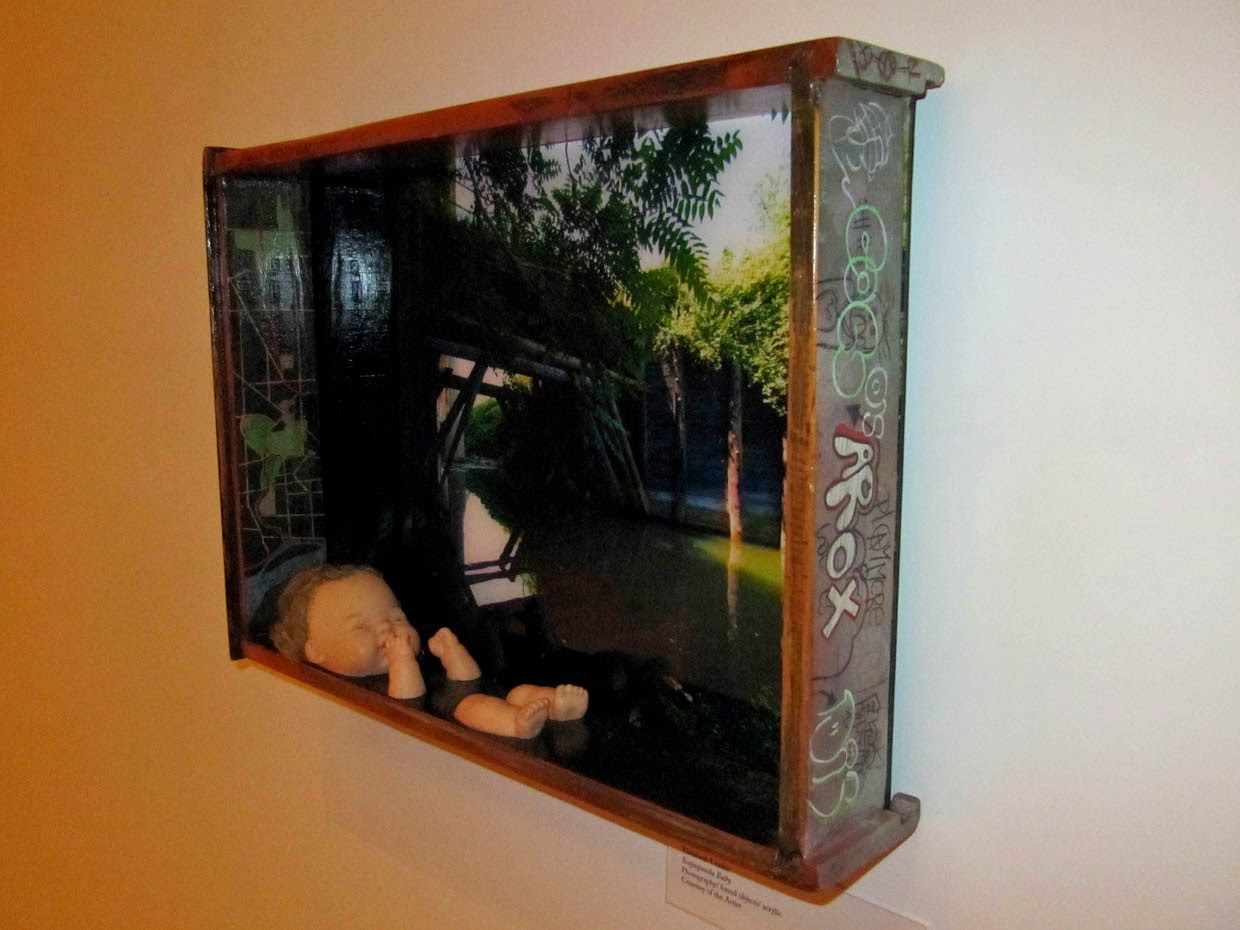 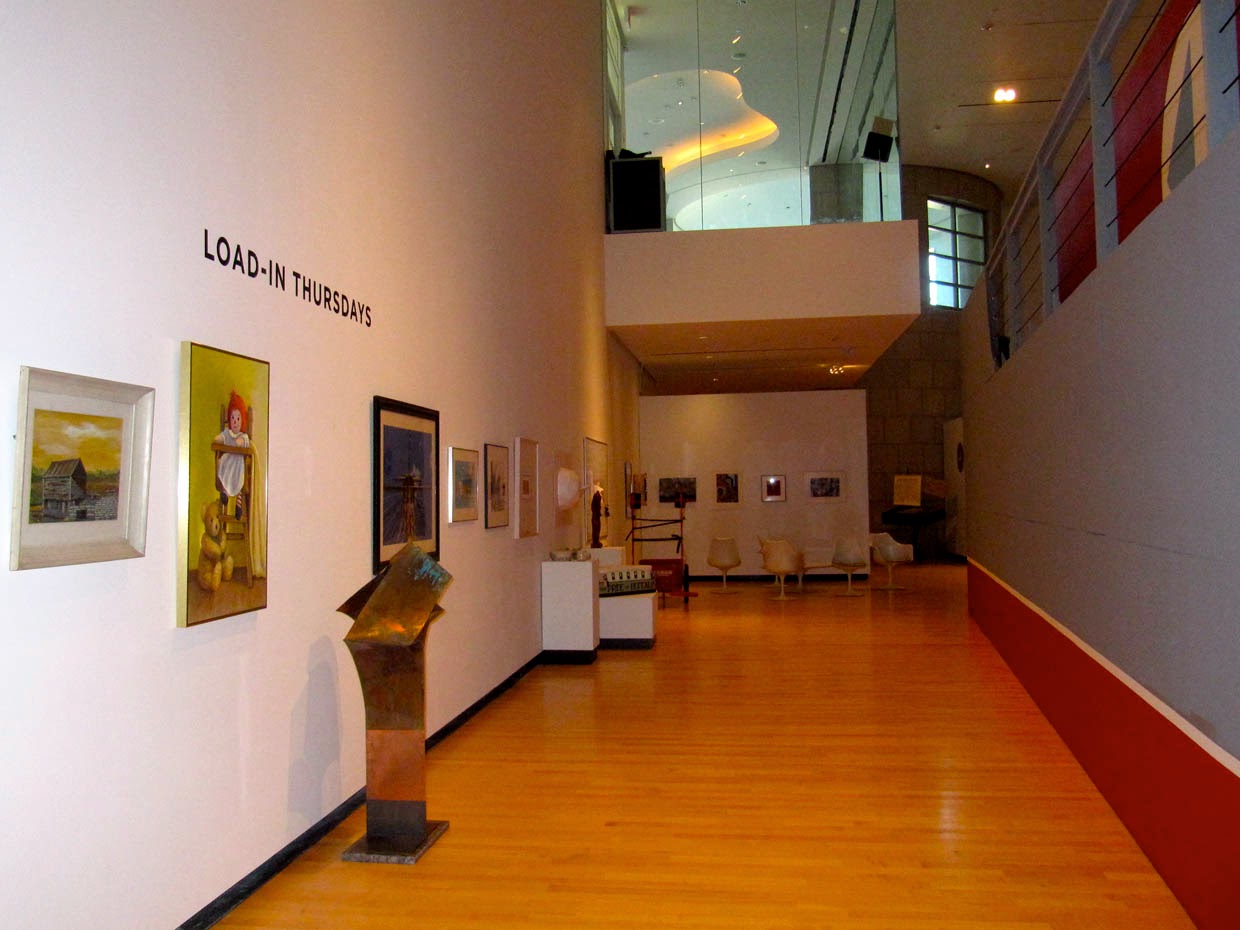 A brilliant idea is becoming reality inside the Burchfield Penney Art Center. Filling the main gallery is a prototype of a barge – the kind of barge that used to haul “lumber, coal and hay” along the Erie Canal.  But the barge being planned at the BP will carry art and artists all the way through the canal system and down to Brooklyn. Curator, Scott Propeack, already has his sights set on the historic ‘Day Peckinpaugh,’ part of the New York State Museum collection.  Finishing the restoration of the Peckinpaugh and outfitting it into floating galleries is bound to be a demanding but not impossible challenge.  The potential for art to travel to new audiences through this historical waterway is too exciting not to succeed.

In the meantime, art is being “loaded in” to the BP prototype through an open curatorial system that lets the public join the process. I am happy to say my assemblage; ‘Scajaquada Baby’ made the cut and found a place on board.  The prototype will be on view until October 19, 2014.
Posted by Elizabeth Leader at 8:20 AM No comments: 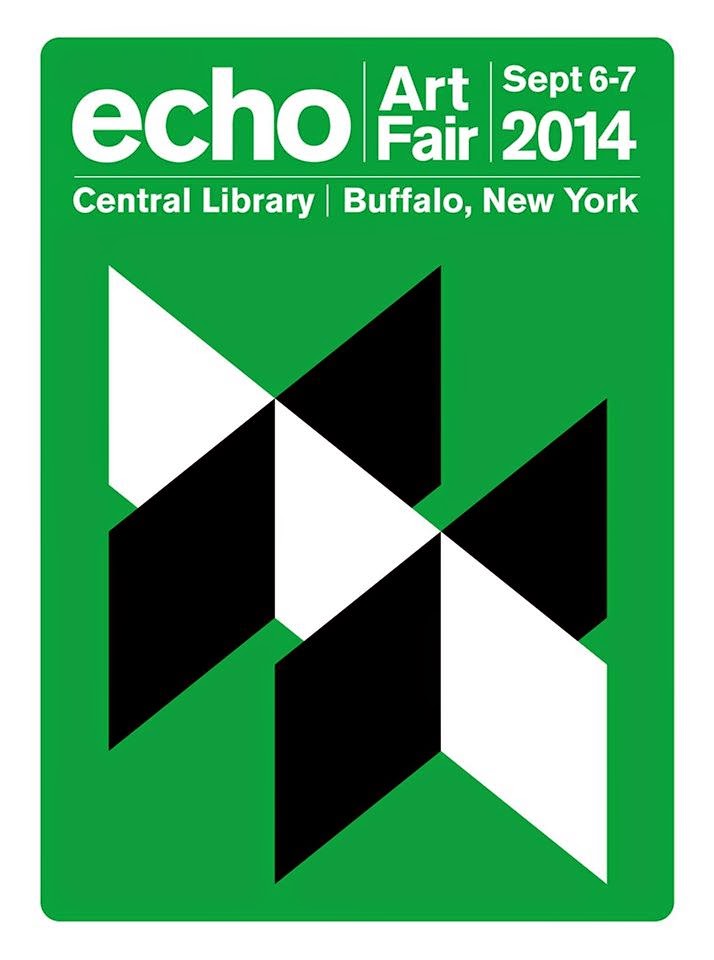 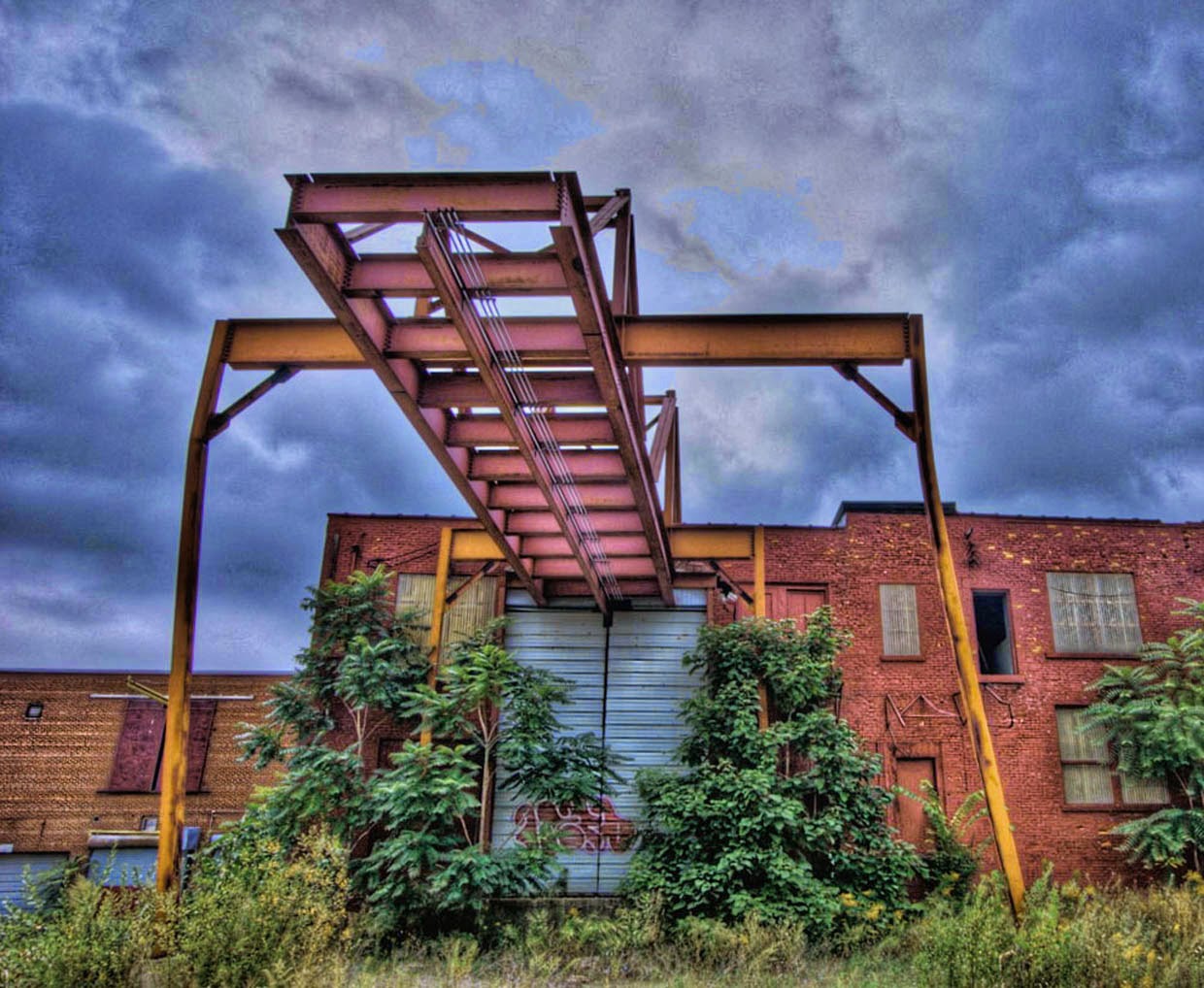 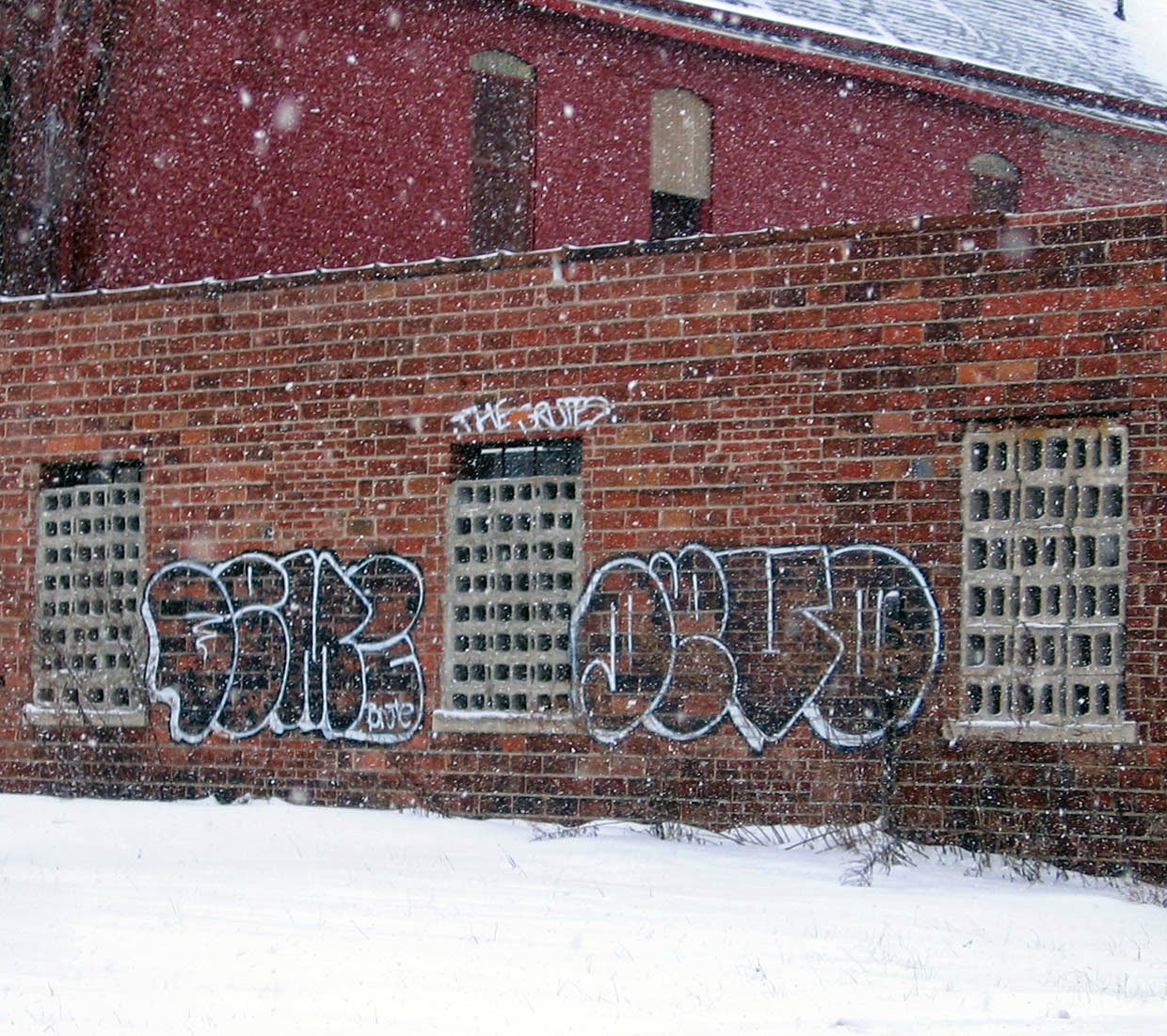 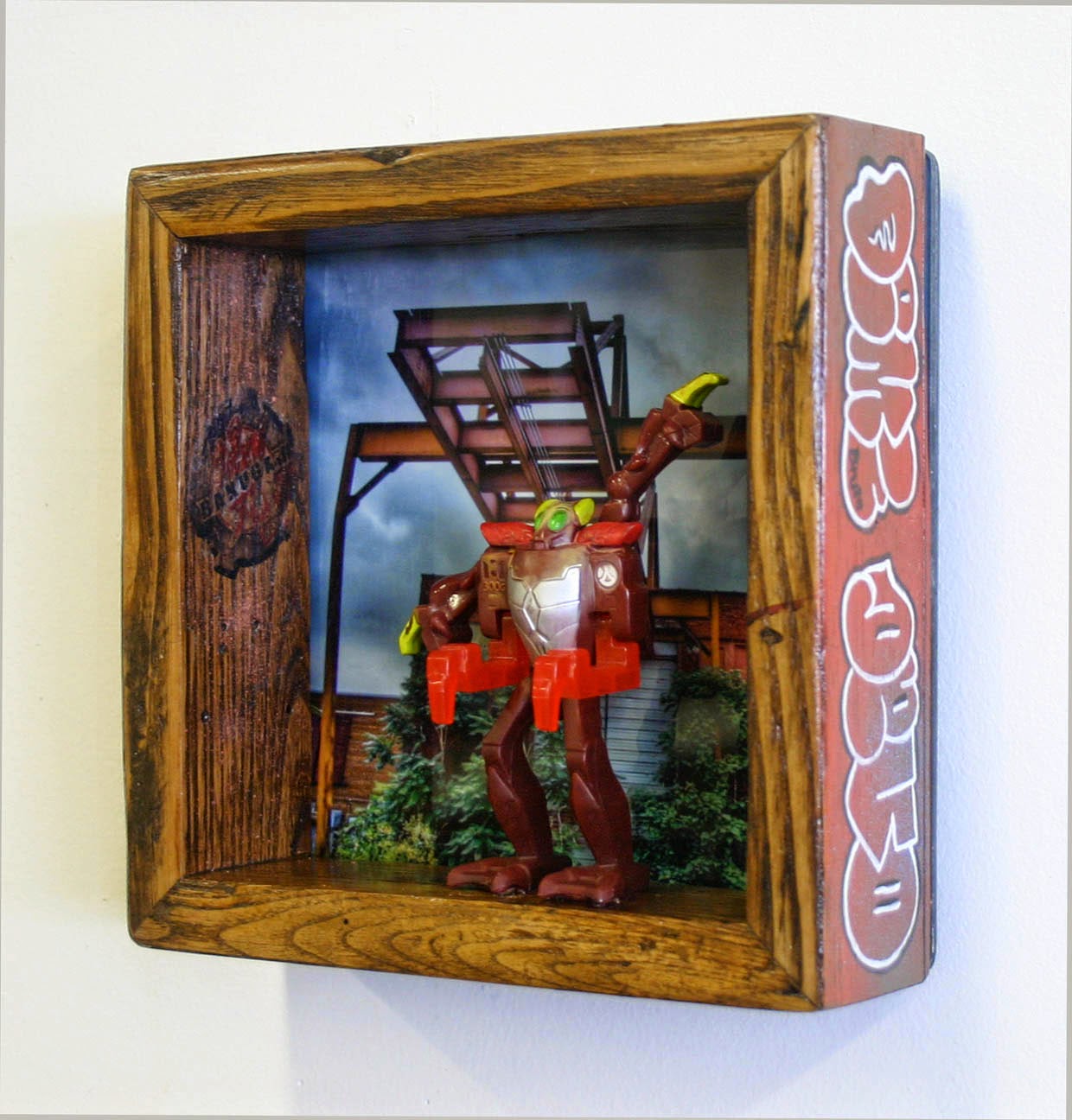 The 4th annual echo Art Fair happens this weekend at the Central Library in Buffalo. The selected artists and galleries from all over (me included) are working on last minute details. It’s an exciting event for everyone involved: artists, collectors, first time buyers and everyone just interested in the whole scene.

Here’s a preview of a new piece from my “Toyology” series. It’s based on things seen and found on Jefferson Avenue on Buffalo’s East side. When you come downtown to the fair, please stop by my booth to say hello and see more.
Posted by Elizabeth Leader at 8:23 AM No comments:

Elizabeth Leader
Buffalo, New York, United States
I am an environmental artist with an eye for urban decay. I paint in oils & acrylics and use a wide variety of materials to communicate ideas about "the trail we leave behind us".